Just How Healthy Is Gatorade? 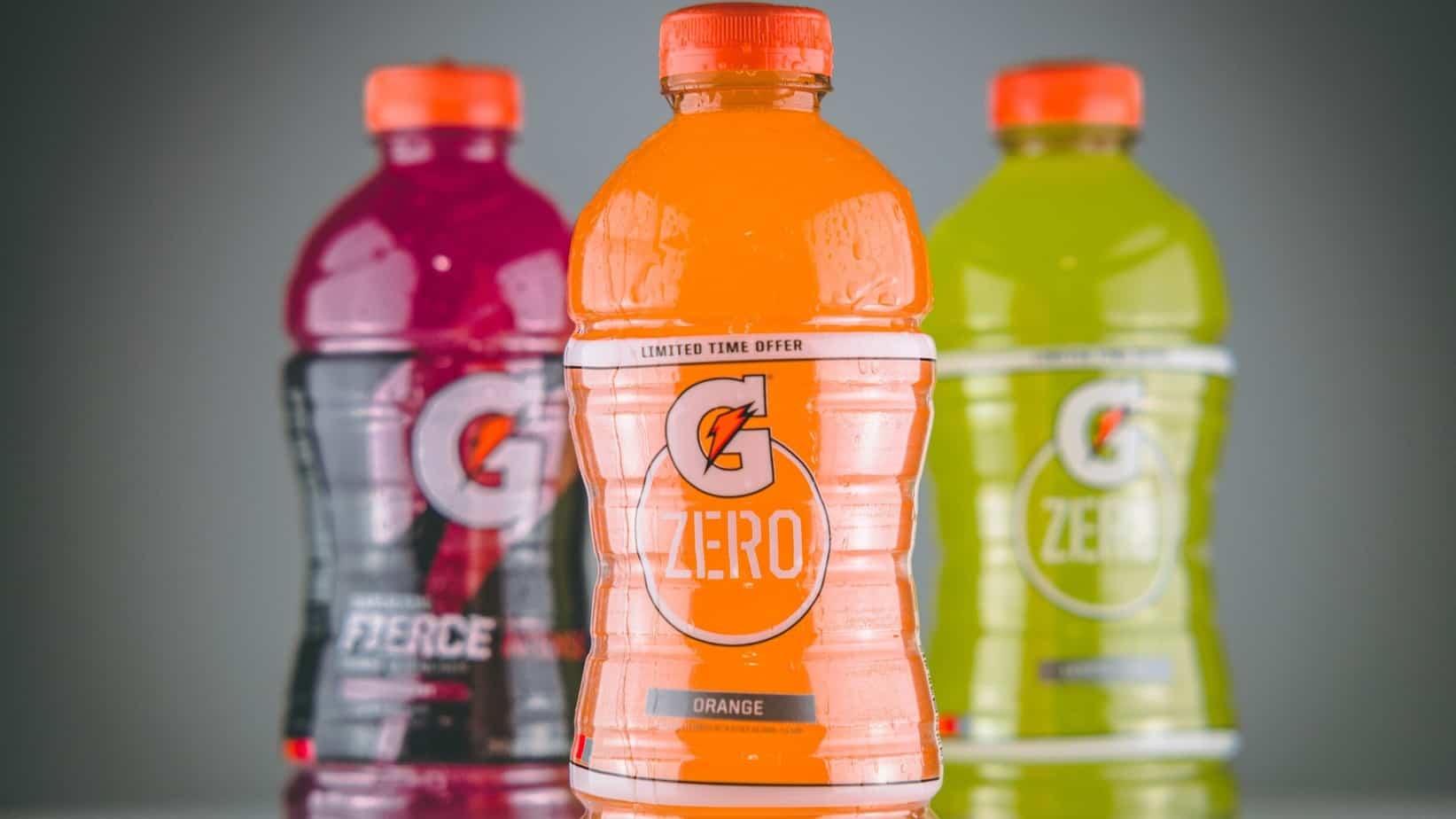 Gatorade is one of the most recognized sports drinks on the market. Some people see the colorful bottles and vibrant labels and assume it must be chock-full of harmful ingredients. Other people associate the beverage with pictures of sports stars re-hydrating and assume that it must be healthy. Like most things, the truth lies somewhere in the middle. There are both positives and negatives to the energy drink. The devil is in the details, so let’s delve into it, shall we? In this article, we will cover the benefits, the risks, and the recommended intake amounts.

Aside from replenishing lost electrolytes, Gatorade doesn’t offer any other health benefits. While the drink can help athletes maintain energy and alertness, it can be bad for your health when consumed for no real reason, primarily because of the sugars it contains.

What Are Electrolytes In Drinks

Gatorade is marketed and sold as an exercise recovery drink. It was developed back in 1965 in Florida by a team of scientists. They wanted to create a beverage that could boost the performance of the University of Florida football team, the Gators; hence the name “Gatorade”. Two years later, the team won the Orange Bowl for the first time in years.

One important note is that it contains 48g of added sugar, which is almost 100% of the daily recommendation of added sugar intake.

Electrolytes are minerals and compounds with an electric charge. Electrolytes are crucial for the body’s functionality, as they produce energy and help the muscles and organs function properly. It’s incredibly important that our electrolyte levels stay within a specific range. We get them from our food and beverages, and we lose them through sweat or urine.

What Happens If We Have An Electrolyte Imbalance?

It’s incredibly important that we maintain healthy levels of electrolytes. Symptoms of an electrolyte imbalance include:

Excessive fluid loss leads to loss of electrolytes. This can be through sweat, urine, vomit, or diarrhea. For this reason, there are specific times when you may need to think about replenishing your body’s electrolytes—after a tough workout, in humid temperatures, after a severe illness, or even during recovery from alcohol dependence.

It can be hard to tell how much fluid needs to be replaced. One way to combat this is to complete a sweat study. A sweat study can be done to measure how much fluid and electrolytes are lost during exercise, which can be incredibly important for athletes, the military, and others who work under extreme conditions.

Gatorade’s electrolyte content was designed to help athletes replace electrolytes lost during a game or training. The drink can also replenish electrolytes that have been lost for other reasons, such as vomiting or diarrhea after illness, or during a detoxification process in a hospital setting.

Is Gatorade Good For You?

If you’ve ever had a nasty stomach bug, you’ll probably know the feeling of weakness and shakiness that come after you’ve vomited or had diarrhea. During any gastrointestinal illness, the body loses excessive amounts of fluid.  With fluid loss comes the potential for electrolyte imbalance. That’s why your muscles can feel so fragile after an illness. Gatorade is one of the drinks that can help make you feel like yourself again. The carbohydrate content, along with electrolytes, can help to prevent dehydration more effectively than plain water.

There is even some evidence that suggests that Gatorade can help minimize the symptoms of a cold.

Because we lose electrolytes through sweat, Gatorade can be a great beverage to drink after a workout or during a sports match. If you find yourself feeling faint, dizzy, or you notice cramping while you’re exercising or straight afterward, try drinking Gatorade to help rebalance your electrolyte levels. It can help to consume a diluted version of Gatorade to help reduce stomach cramps.

In very humid or hot weather, we lose electrolytes through sweat. It’s important to stay well-hydrated in these temperatures, and consuming Gatorade along with water can help to replenish fluids and electrolytes.

Is There Such a Thing as Too Much Gatorade?

So, we’ve covered the benefits of Gatorade. But what are the downsides of sipping on the tasty sports drink? Is Gatorade bad for you?

Well, Gatorade was designed to taste good. In fact, it’s so tasty, it’s become almost as popular as soda. Its delicious taste comes from, you guessed it, added sugars. One bottle contains 48 grams of sugar. To put this into perspective, there are 65 grams in a bottle of Coca-Cola, and 20.8 grams in a mars bar, so Gatorade falls somewhere in the middle.

Consuming this amount of sugar regularly can have  detrimental effects on your health, including

How Much Gatorade Is Too Much?

Like any food or beverage, Gatorade should be enjoyed in moderation, because of the high sugar content, Gatorade can quickly become harmful if consumed too frequently.

For instance, if you drink three Gatorades per day, this will add 670 calories to your diet along with 144 grams of added sugar. Based on the recommended 2,000 calories per day rule, this amount would constitute roughly 34% of your daily calorie intake and nearly 300% of the daily recommended added sugar intake.

If you are exercising excessively or regularly, electrolyte replacement is important. However, it might be good to drink a sugar-free version of the drink to help limit added sugar intake.

What About Gatorade Zero?

Gatorade Zero is a fairly new release. This product contains all of the electrolytes of Gatorade without any of the sugar. Instead, the drink is artificially sweetened with sucralose.

There is some debate as to whether or not sucralose is harmful. Sucralose is a manmade product, derived from sugar and modified with chlorine atoms in place of hydrogen; this boosts the sweetness and prevents the body from metabolizing the compound, preventing blood sugar spikes or added calorie consumption. Some evidence suggests sucralose may increase blood sugar and insulin levels.

However, there is little conclusive research on the subject. For now, it, along with five other high-intensity sweeteners, are included on the FDA’s GRAS (generally recognized as safe) list.

There are plenty of beverages that contain electrolytes without the added sugar. Drinks like 100% fruit juice or coconut water are just a few. If you do choose to drink Gatorade, pay attention to the sugar and sodium quantities you are consuming to make sure you are not drinking an excessive amount. As with everything, moderation is key.

Is Gatorade better than water for hydration?

Gatorade claims that the added electrolytes and carbohydrates in the beverage make it better than water for hydration. It’s important to note, however, that this only applies when the body needs electrolytes. One study clarifies the claim by saying that Gatorade may be better for hydration, only when children or athletes are engaged in prolonged and vigorous physical activity.

What are the electrolytes in Gatorade?

The main electrolytes in this sports drink are sodium and potassium. These are two of the most important electrolytes for the human body. The maker of Gatorade chose these as they are particularly helpful for hydration and muscle functionality.

How quickly will Gatorade work?

Will you start feeling the effects of Gatorade immediately, or will you have to wait? On an empty stomach, the beverage will be absorbed into the bloodstream within a few minutes. In most cases, the body will absorb the drink within 15-20 minutes.

Is Gatorade safe for children?

More and more children are drinking Gatorade on a daily basis. However, medical professionals have warned against this rising trend. When children consume Gatorade regularly, this habit can contribute to obesity and tooth decay. Instead, children should drink lots of water, small amounts of 100% fruit juice, and a few glasses of low-fat milk.

What’s The Best Thing to Drink After a Workout?