In Our Search For the Best Bone Broth, The Winner is … 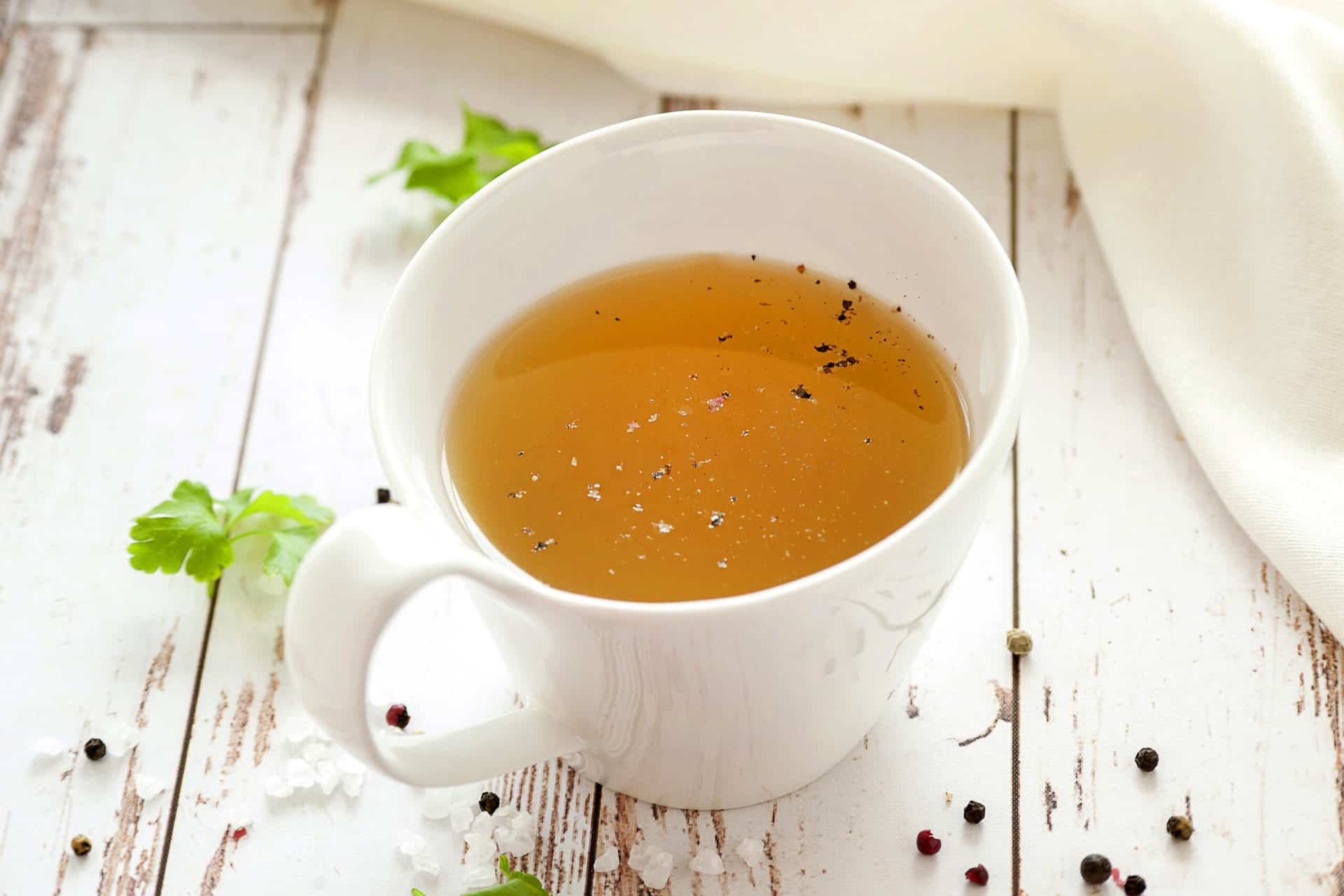 Cooked hot bone broth with spices and fresh herbs. Medical dietary broth and superfood. For ketogenic diet and paleo diet. Serve on an individual plate on a wooden background and with a white napkin.

Bone broth is full of health benefits, but not everyone has the time to spend almost an entire day making bone broth. Nor do you need to as bone broth is now easily found in many stores.

However, with so much broth on the market, it can be tricky to determine which is the best or the healthiest when buying bone broth. We’ll walk you through some popular brands to determine the best and healthiest bone broth choices.

What is Bone Broth Anyway?

Bone broth is exactly what it sounds like. It’s a broth derived from animal bones and the connective tissues of animals. The bare-bones and ligaments are slowly simmered and cooked under pressure. Bone broth is commonly made from bison bones, fish bones, chicken bones, or beef bones. It is also often used in soups and sauces.

Why Do People Drink Bone Broth?

Drinking bone broth is an easy way to add more calcium to your diet. The bones will also contain other minerals like potassium, phosphorous, iron, and magnesium. It’s difficult to give an exact nutritional breakdown because the number of nutrients that leak out of the bones and connective tissue depends on the source and how it was prepared. That said, bone broth can be a convenient and tasty way to add nutrients to your diet as having a diet rich in vitamins and minerals helps maintain a strong immune system.

Another benefit of bone broth can be found in the connective tissues like ligaments and tendons from the animals used in making it. These tissues contain glucosamine and chondroitin, compounds believed to be beneficial for preserving the health of your joints.

The more common reason why people like to consume bone broth is due to its purported anti-aging benefits. Bone broth contains hyaluronic acid. Studies have found that people who consumed hyaluronic acid in their diet had more hydrated skin – hence why this is a common topical skincare ingredient. Bone broth also contains gelatin – which is derived from collagen. Gelatin is full of amino acid proteins and has been associated with helping the skin absorb moisture better and promote cell growth. While there are skin benefits linked with bone broth, it would not turn back the hand of the clock.

Honest + Good are true to their name. Their bone broth products come from grass-fed beef bones. It’s free from hormones, preservatives, and additives.

Our rating: 5 out of 5 stars. This bone broth is more affordable than other brands. Due to the mild taste, it’s versatile enough to be added to most dishes or enjoyed on its own.

Our rating: 4 out of 5 stars. Take Stock’s chicken bone broth is delicious and has a rich flavor. It’s a ready-made soup which is convenient. The downside is that it’s not as versatile as other brands so there are fewer ways to incorporate it into your diet.  Take Stock’s chicken bone broth is loaded with nutrients and is high quality – but, bone broths that are not unflavored are risky as the taste won’t appeal to everyone.

Our rating: 4 out of 5 stars. Jarmino’s chicken bone broth is made from free-range chickens which is a good sign. The vegetables provide extra nutrients. Some customers don’t love the taste of this chicken broth so you might want to use it as a base in a soup or as a small component of another dish.

The Best Bone Broth For On-The-Go

Euphoria Bliss bone broth powder is made from beef broth powder. This powdered bone broth has a neutral taste so it can be added to drinks, soups, and other dishes. It’s a Kosher and Halal bone broth.

Our rating: 5 out of 5 stars. Euphoria Bliss bone broth powder dissolves easily into drinks and has a very neutral taste! Lots of customers even add this beef bone broth to a cup of coffee!

Planet Paleo’s organic vanilla and banana bone broth are perfect for people on the go. You can drink this powdered bone broth just like you would drink a regular protein shake after the gym. It’s made from bovine bone broth powder and is flavored with organic banana powder, cinnamon, and organic vanilla powder. This bone broth comes from the grass-fed beef bone.

Our rating: 4 out of 5 stars. Planet Paleo’s bone broth tastes great! It’s a little pricey and some customers are not a fan of the sachets the beef bone broth comes in – as you can’t really customize the portions.

Kettle & Fire is one of the most well-known bone broth brands – for good reason! They’ve been highly rated by big names such as Women’s Health and the New York Times. Unlike many competitors, they have a massive range of bone broths from ordinary chicken bone broth or beef bone broth to miso soup with bone broth and even curry with bone broth.

Our rating: 5 out of 5 stars. Kettle & Fire have something for everyone in their delicious bone broth selection. Their bone broths taste delicious, have long simmer times, and are made from organic ingredients.

Our rating: 5 out of 5 stars. Pacific foods have lots of unique bone broth flavors like camomile and lavender and even an organic chicken noodle soup made from chicken bones! They also have classics like traditional chicken broth. Their products are also low-fat and low-calorie.

Not everyone is a fan of the taste of some of their products and might prefer unflavored bone broth. It’s convenient that they come in large and smaller servings.

What To Look For in A Pre-Made Bone Broth?

A bone broth should be simmered or pressure-cooked for a long time to extract the most from the bones and ligaments. Many top-rated bone broth brands will indicate “long simmer time” or “slow-simmered” on their label, so you know you’re getting value for your money.

The healthiest bone broth will be made from wholesome ingredients. This means natural ingredients like the bones and tissue of animals as well as organic herbs, spices, and vegetables. Try to avoid flavor enhancers or preservatives.

You might not think that how the livestock was treated in life matters when it comes to bone broths, but it does.

Free-range chickens were found in this study to have more protein than cage and floor-pen chickens. Free-range chicken is also lower in fat. Studies have also found that grass-fed cows produce beef that is lower in fat and higher in vitamins and minerals such as B vitamins, iron, zinc, and selenium. So, it’s best to choose a chicken bone broth derived from pasture-raised chicken bones and a beef bone broth from grass-fed cattle.

How Much Bone Broth Should You Drink?

As bone broth is typically high in salt, you might not want to have it more than once a day. That said, you can drink it as often as you like. While some drink a cup a day, others drink it only a few times a week. That said, If you are drinking bone broth collagen once every few weeks it most likely would not provide any benefits.

How Do You Make Homemade Bone Broth?

Pople many people find it better to buy a premade bone broth instead of making broth from scratch.

Why Bone Broth is Not Good For You?

Bone broth is good for you. Concerns about how good it actually is are more to do with it being over-hyped.  Some health experts say that there are few scientific studies to support the often-touted advantages of bone broth. Others add that the trace amounts of protein, potassium, phosphorus, and calcium make it less advantageous than drinking other things higher in those vitamins. Another subset of experts argue that people can’t easily digest collagen in bone anyway, and therefore it is most likely not as effective at anti-aging as speculated.

Despite all these points, the conclusion is that bone broth is not harmful as long as users know the quality of the ingredients in it. Bone broth is hydrating, it’s a source of extra minerals but it’s not a magical cure-all. In fact, bone broth can be quite high in salt. The exact nutritional breakdown varies from bone broth to bone broth, but one cup can contain around  486mg of sodium. This is 20% of the recommended daily allowance!

Consuming too much salt on a regular basis can cause inflammation. Given that many drink bone broth for its purported anti-inflammatory properties, you’ll need to monitor your sodium intake to actually reap the benefits.

With that said, you don’t need to be afraid of salt! Salt is important for helping to regular blood pressure and plays a role in hydration, so there’s no need to completely cut it out of your diet.

A certified organic product is generally best. That kind of broth was produced under very strict standards using bones that come from healthy animals that were not given antibiotics or hormones.

While bone broths that are not premium or organic still have their benefits, avoid ones that have fillers such as yeast extract (monosodium glutamate). Also, look at how much sodium is in the product, as too much sodium is never a good thing.

Bone broth is a food product that deserves attention. At the very least, by trying it, people get a little more protein and better hydration than they otherwise would.

Is Lemonade Good for You? A Look at The Pros and Cons