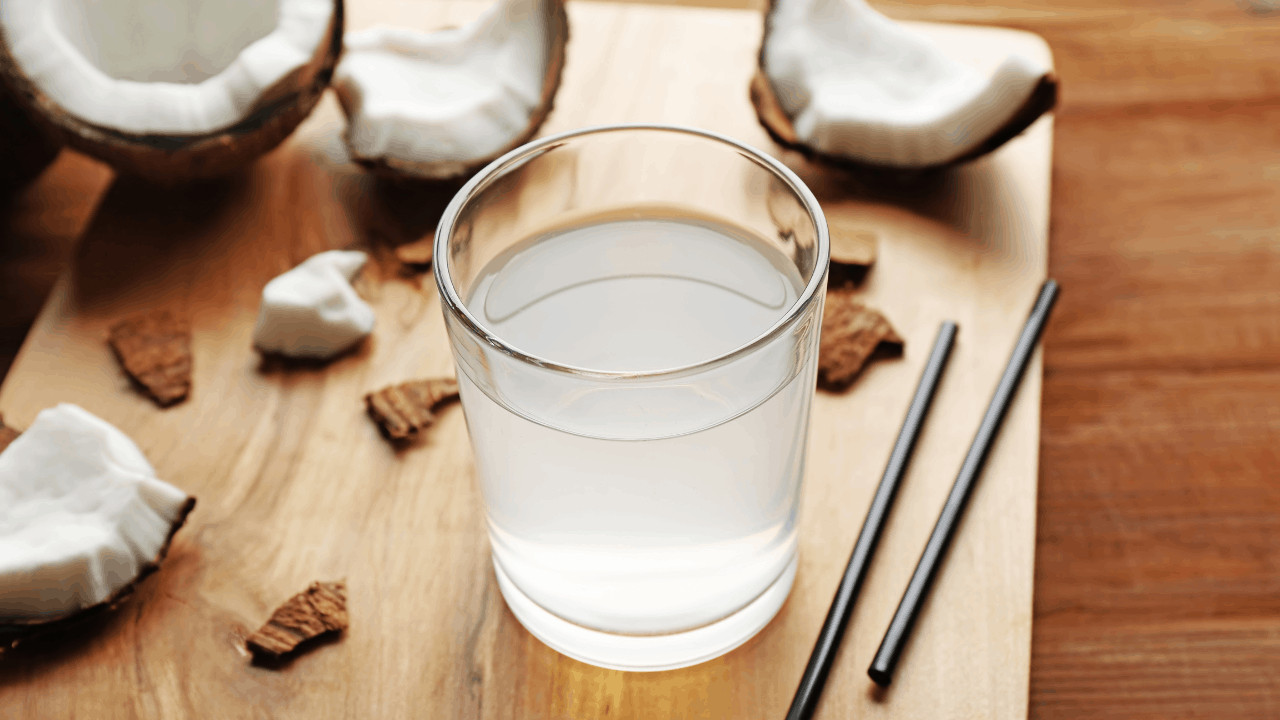 Coconut water is a go-to drink for millions of people – but despite the beverage being readily available in stores worldwide, some people still might find it a little mysterious.

Although the clue’s in the name – coconut water being, well, the water that comes from inside a coconut – for a lot of people, they may still have some questions about it. What’s in it? How often should I drink it? Is it safe to drink if it’s pink? And how to make coconut water, and use it in recipes?

Well, never fear. In our comprehensive look at coconut water, we’ve got it covered – check out everything there is to know below.

What Exactly Is Coconut Water, And What’s In It?

Coconut water is the clear liquid contained inside the shell of coconuts. Contrary to coconut milk, which is made by blending the coconut meat and water of a mature coconut, the water is taken from young green ones.

Coconut water is made of over 95% water, with around 4% of its composition coming from sugars and dietary fiber thanks to the pulp, and small amounts of protein and fat making up the final 1%. It also contains B vitamins, potassium, vitamin C, antioxidants, and a balance of electrolytes (according to WebMD), which make it a useful drink to consume after physical activity.

Coconut water can be drunk straight from opened fruits, but typically these days it’s bottled or placed in cartons and sold in stores and the food market. When drunk from the coconut (delicious when they’re in season), it’s considered ‘fresh’ or ‘raw’, and fresh or raw water is also sold in bottles, sometimes with extra pulp – but it can also be pasteurized, as required in several markets (like Australia).

It’s generally not advisable to drink the water of the brown husk coconuts  – it’s best to be drained out, as it can ferment and turn sour. Save the brown ones for the coconut meat or for making coconut milk.

How To Make Coconut Water At Home

To make coconut water at home is a straight forward task as it literally only takes a coconut. For delicious flavor, make sure to select a young green coconut. Once you do that, all that is left for you is to flip it over to its underside, carve a hole into it and take insert your straw.

Are Fresh And Raw Coconut Water The Same?

What About Pasteurized Coconut Water?

Pasteurized coconut water is a common find in the grocery store (and many brands can be from concentrate). Generally, coconut water is pasteurized due to bacteria concerns, due to it beginning to oxidize and develop bacteria once exposed to fresh air.

If there are concerns about drinking fresh coconut water – if pregnant, for example – it’s possible to pasteurize at home. Simply take the water and heat it to between 75-95 degrees centigrade for between 15-120 seconds. It might be found, though, that it’s easy to just buy pasteurized coconut water instead of adding heat at home!

How Often Can I Drink Coconut Water?

Coconut water is generally safe to drink every day, and in moderate quantities is perfectly healthy – and many people like to consume the drink daily for its vitamin, potassium, electrolyte content, and hydrating qualities.

However, coconut water does have sugar content, so make sure to take this – and the calories that come with it – into account when drinking it (so, although it can occasionally replace regular water, we wouldn’t recommend drinking only coconut water). One thing to take into account is that certain brands may add further fruit sugar or even preservatives to their coconut water, which is of course something to keep an eye on.

My Coconut Water’s Pink – Is It Safe?

Absolutely! If the water is looking pink that’s simply because of the individual balance of antioxidants contained within it, which can cause a pink tint. Some coconut water companies choose to lessen the pink effect by using vitamin C or ascorbic acid – but others leave it natural. If coconut water is 100% raw and untampered with, it should be pink – so not to worry if it is, it just means it’s the good stuff.

Different brands will have different expiry dates, and this’ll generally be on the bottles. Generally, though, bottled coconut water will last for around 6-9 months unopened (although if it’s ‘raw’, check the bottle, as it may be less).

Once opened, the water will last 1-3 days in the refrigerator. Then it will start to go off and smell a little sour. If spoiled water is consumed, it’s not something to worry about – it generally won’t induce illness, as it just starts to turn to vinegar; if ingesting spoiled coconut water does cause illness, make sure to contact a healthcare professional, as there’s a chance it could have been contaminated.

Coconut water needn’t be drunk on its own – it can make a great base or addition for many recipes!

Try creating lemonade out of coconut water – it’s a breeze and a huge upgrade from regular lemonade.

In a large bowl or pitcher, stir together the coconut water, lemon juice, lime juice, and sugar or agave nectar until it’s all mixed well. Then, add the ice to a glass, and pour the lemonade over. Garnish the lemonade with the lemon slice and mint.

For one of our top tips, as a super-special alternative to this lemonade, add a few tablespoons of strawberry syrup when stirring it all together (note: this will add calories). It’ll make a strawberry coconut water lemonade that’ll have everyone singing.

Combining the hydrating effects of coconut water with an alcoholic cocktail tackles the hangover before drinking… right? Either way, this drink is a must-try.

Take all the liquid ingredients and fruits and combine them in a bowl. Then refrigerate, covered, until ready to serve – and when ready, ladle into a glass over plenty of ice.

It’s also possible to leave the alcohol out if serving it to kids and to add it in for adults – or, to leave it out entirely, and enjoy a virtuous mocktail!

Coconut water is excellent for hydration, and due to its electrolytes is particularly beneficial if sick and losing fluids. It’s also great for digestion, due to fiber content from the pulp – and it’s vitamin C content means that it’s great for the immune system as well as for the skin.

Due to its potassium content, the water could help reduce blood pressure, which can lower the risk of heart disease – and it may even be beneficial, according to this study, to prevent strokes. Add to that the delicious taste, and this drink’s a winner.