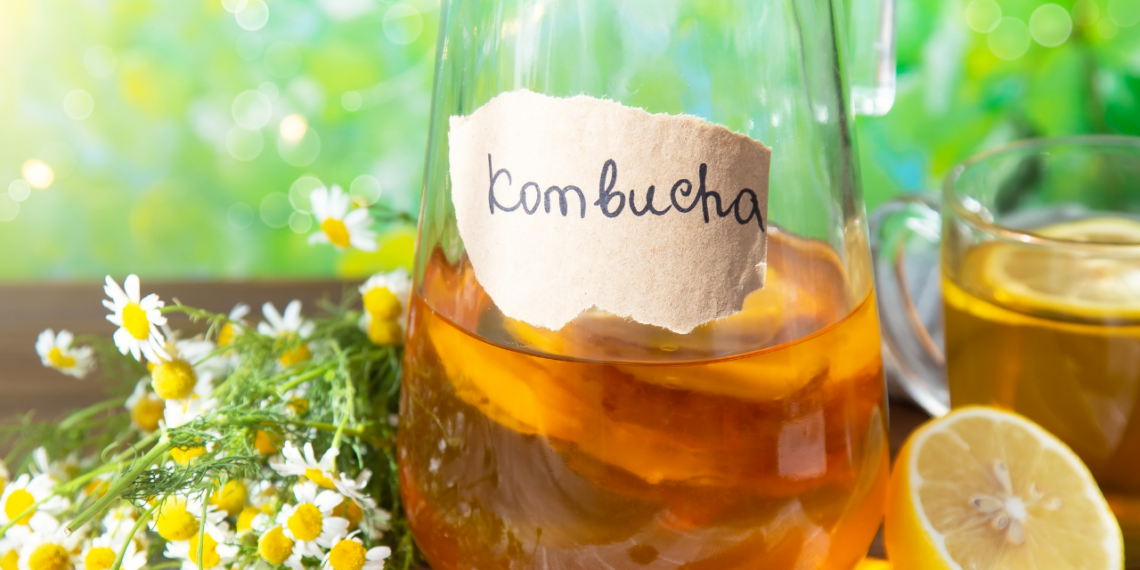 What you eat and drink plays a significant role in your body weight and body composition. Drinking sugary soft drinks hurts body weight and metabolic health. In contrast, unsweetened green tea helps with weight control, primarily if you use them to replace sweetened beverages. Some research shows sipping green tea can subtly boost resting metabolic rate. But there’s another variation on green tea. It’s called kombucha tea, and a growing number of people drink it because they believe it has health benefits and helps with weight loss. Is there truth to these claims?

Kombucha most likely helps with weight loss because it contains less sugar than soda. As Kombucha is somewhat sweet, it satisfies cravings for soft drinks. Replacing soda with Kombucha can help you drop extra calories and sugars from your diet, and by extension, lose fat.

First Things First: What Is Kombucha?

Kombucha tea is a fermented beverage.

Fermented foods and beverages contain probiotics and healthy gut bacteria beneficial to the gut microbiome and support gut health. Kombucha makers use colonies of yeast called SCOBY (symbiotic colony of bacteria and yeast) and bacteria to ferment tea. The fermentation process produces acidic compounds, including acetic acid, that leaves the beverage with carbonation and a slight alcoholic taste due to the tiny quantities of alcohol produced during fermentation.

Compounds found in Kombucha vary depending on their fermentation times, temperature, and sugar content. You will typically find B vitamins, glucuronic acid, and antioxidant-rich polyphenols in a glass of Kombucha. Kombucha is typically made with either black or green tea, and it contains antioxidants called catechins, including EGCGs.

How Does Kombucha Help Lose Weight

May Help You Burn More Calories

Studies show that drinking several glasses of green tea per day can raise the resting metabolic rate enough to burn an extra 88 calories per day, thanks to metabolism-boosting EGCG. Another study found that those who introduced green tea or green tea extract lost more weight than the placebo group. Similar results have been noted in participants drinking black tea. While caffeine has been associated with weight loss, research attributes weight loss to the presence of antioxidants.

The acetic acid, the same compound in vinegar, in Kombucha may also help with weight control. Studies show that acetic acid curbs hunger and reduce carbohydrate absorption. You may find that you eat less naturally when you drink Kombucha. Additionally, the acetic acid from the vinegar can lower the rise in glucose after a meal.

While Kombucha does not have as much acetic acid like apple cider vinegar, people typically only consume one to two teaspoons of apple cider vinegar per day or between meals. In comparison, you’re more likely to drink more Kombucha, thereby ingesting similar if not more acetic acid.  Animal studies have found that these acids reduce how much fat the body stores.

The bacteria found in the gut and stomach varies from person to person, but some studies have asserted that those with less diverse bacteria in their digestive system seem to gain more weight. It would reason that you could use Kombucha to help this healthy bacteria flourish.

Additionally, some theories suggest probiotics alter how many calories and nutrients you absorb from your food. There are even claims that probiotics influence hormones that regulate appetite and metabolism.

How much Kombucha should I drink a day for weight loss?

If you’re drinking a low-calorie, low-fat, and low-sugar brand of Kombucha, then you can drink it up to three times a day for weight loss.

Many studies about tea and weight loss had participants drink more than one cup per day. That said, alternatively, you could drink one serving of Kombucha per day and have two cups of tea.

Could Kombucha Make You Gain Weight?

Generally, it should not make you gain weight. Most homemade Kombucha is very low in calories, sugars, and fats. An average 100ml serving of Kombucha could contain only 0.2 grams of fat and 0.8 grams of sugar.

The problem is that store-bought brands will often add extra sugar, canceling many health benefits of drinking Kombucha.

Many people want to lose belly fat as it has been linked to an increased risk of heart disease and type 2 diabetes.

Keep in mind that sugar increases abdominal fat – so, if you’re drinking sugary Kombucha, it would not help you lose belly fat. Quite the contrary, it would do the opposite.

Generally, you can’t drastically lose weight in one specific area thanks to a certain kind of food or drink. Weight loss is spread out evenly throughout the body, and if you are losing significant weight, you may notice the pounds peeling away from your tummy.

Kombucha contains fiber. One study found that those who increased their soluble fiber intake gained less belly fat over a 5-year observation period.

As mentioned earlier, Kombucha is a source of acetic acid. One study found that men who consumed apple cider vinegar daily lost weight around their waists and stomach. Several animals studies have also produced similar results.

Can You Drink Kombucha To Reduce Bloating and Lose Water Weight?

Kombucha can help with bloating due primarily to the probiotics in the drink. As Kombucha is essentially fermented tea, it’s a great source of healthy gut bacteria which aid digestion. Studies on people with poor digestive health have found that they can help to ease bloating.

Although the human body is mostly made up of water, excess water is referred to as water weight because it makes people feel heavy and puffy. Kombucha may be of little help in this scenario. It contains only around 14 mg of caffeine, which is similar to that of decaffeinated coffee. Studies have found that the diuretic effects of caffeine can help reduce water weight, but this is only a short-term solution.

Believe it or not, research suggests that staying hydrated can help with reducing water weight.

Given that Kombucha is primarily made up of water and contains a little caffeine, it might help somewhat with water retention. However, it’s not your best bet. Coffee might be a better solution.

When Should You Be Drinking Kombucha For The Greatest Weight Loss?

Drinking Kombucha before a workout seems to be an effective time for weight loss. One study found that drinking green tea an hour and a half before exercising resulted in breaking down more fat while exercising.

If you don’t have much of an exercise routine, it doesn’t seem to matter when you drink Kombucha. The weight-loss benefits of tea are more pronounced if it’s something you’re often consuming.

Kombucha Brands To Avoid That Are High In Sugar

Although these brands are significantly less sugar than soft drinks or sodas, they contain higher sugar than other brands.

Kevita – The exact amount varies a little from product to product, but a 15.2 fl oz container of their citrus kombucha contains 16 grams of sugar.

WhaleBird Kombucha – A 16 fl oz can of Manguava Kombucha contains 16 grams of sugar.

Kombucha Brands To Choose That Are Low in Sugar

Humm Kombucha – Not all Humm’s products are sugar-free or low in sugar, but they have a sugar-free range, including their canned blood orange kombucha.

Juneshine – A 16 fl oz can of their Acai Berry Hard Kombucha has 4 grams of sugar.

Booch Craft – The amount of sugar varies from drink to drink. Their Ginger Lime kombucha is the lowest in sugars, with 5 grams per can. Their Apple Jasmine drink has the most sugar with 11 grams per can.

Nova Easy Kombucha – The amount of sugars varies per drink but most only contain 2 to 3 grams of sugar.

The best way to drink Kombucha for weight loss is in place of soft drinks, energy drinks, and sports drinks. These beverages are loaded with sugar, which negatively impacts body weight and metabolic health.

If you buy Kombucha bottled at the supermarket, check its sugar content. Some bottled kombucha contains as much as 25 grams of sugar. Look for low-sugar versions of Kombucha that have less than 5 grams of sugar.

Assuming you choose a low-sugar version, Kombucha may be a healthier alternative to protein shakes and smoothies if you’re trying to lose weight.