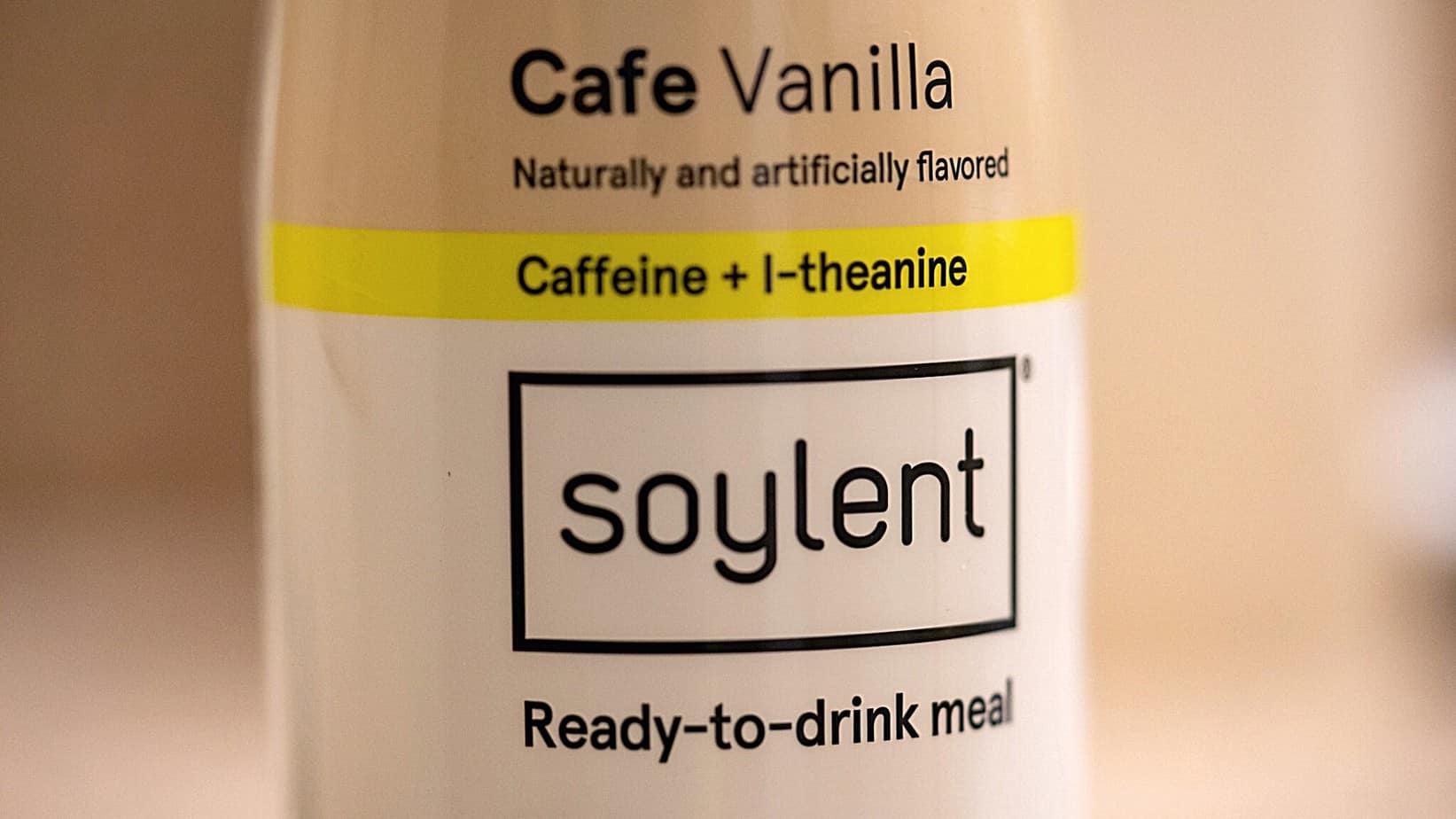 Soylent is a meal replacement drink that is known for its ability to give you a healthy, balanced meal in liquid form. The drink was designed to take the hassle and expense out of cooking. If you’re constantly on-the-go and you need to stay nourished, Soylent could be right for you.

However, despite the drink’s claims of the ability to replace your meals, there has been some debate as to whether the beverage really is healthy. Keep reading to find out everything you need to know about Soylent.

Soylent is a company based in Silicon Valley whose mission is to provide complete nutrition that is affordable and accessible to all people, not just those with more financial means (the name actually comes from a fictional nutrition company written about in a dystopian book/movie). Soylent meal replacements were designed in 2013 by an engineer named Rob Rhinehart. He blended 35 chemical ingredients together to create the company’s proprietary formula. He claimed that the drink gave him a range of health benefits and that it greatly reduced his monthly food expenses.

The drinks come in four forms:

Soylent also makes a 100 calorie “Soylent Squared” snack bar, which comes in three flavors but is currently sold out on the website.

Soylent states that if you drink five servings of Soylent a day,  you’ll consume 2,000 calories, 15g of fiber, and 100% of your daily recommended micronutrients.

While the concept of replacing most or all of your meals with a beverage may sound a little crazy to some, for many people, the drink has become a wonderful way to save money and time while staying nourished. Let’s find out if it really is healthy to drink Soylent instead of eating meals.

What is Soylent Made Of?

Soylent is made of a combination of soy protein isolate, high oleic sunflower oil, allulose, and a range of essential vitamins and minerals. Each drink contains fat, carbohydrates, protein, and fiber and equals around 400 calories (except for stacked, which contains 180 calories).

Here is the nutritional breakdown of one premixed Soylent drink according to the Soylent website.

Soylent comes in a variety of flavors. The most common are “original” and “cacao.” The taste is often compared to “cereal milk,” or milk that has been sitting in a bowl of cereal. The cacao flavor would be similar to cereal milk mixed with chocolate.

Can You Live Off Of Soylent?

Soylent is designed to replace your meals or to be consumed in between meals as a snack — but is it possible to actually live off of these drinks and stop eating real food? To most of us, the prospect of giving up food sounds pretty extravagant and incredibly unpleasant. Food is essential for a healthy life, right? Well, according to some Soylent fans, it’s possible to live a healthy life without eating any food at all. However, this is not something that we at Drink Filtered recommend or encourage.

A few people have experimented with cutting out all food and living off of Soylent. They’ve left detailed Soylent reviews about their experiences. In 2015, one man spent 30 days on Soylent. According to this Soylent review in The Hustle, he went through a series of body changes — but he did survive!

At first, he experienced stomach gurgles and some particularly malodorous gas, which could have been a result of the allulose or added fiber.

By the end of week one, he felt worn out and low on energy, despite the company’s claims that Soylent would make him feel energized. He also lost a significant amount of weight.

Throughout the next two weeks, he felt more energized, and his weight returned to normal — which is impressive considering the fact that he was very active and an avid runner.

By the end of the experiment, he found that he felt better after switching back to food. However, his blood tests actually improved after a month on Soylent. He also felt that his productivity levels improved with the hassle-free nature of Soylent meals.

In another similar experiment, a woman from Shape went three days a week on Soylent. While she discovered her love of real food through the experiment, she admitted in her review of Soylent that the drink did keep her going.

While it may be possible to live off of Soylent, it’s probably not the best way to go about things. Nicole Myers, the director of communications at Soylent, has said, “Living off Soylent is not something we encourage.” Instead, the drink is designed to replace your “boring throwaway” meals — the meals you eat when you just need to eat something to keep you going. Think about the bland office sandwiches or the post-workout protein bar.

Soylent is designed to give your body everything it needs to survive. Some of its ingredients can give you some added health benefits.

What are the Downsides of Soylent?

While Soylent has amassed a pretty eager, cult-like online following, most people can see that giving up all meals in favour of a soy-based beverage sounds less than ideal.

Many professionals recommend avoiding meal replacement beverages in the long-term for health reasons. First of all, they don’t contain fresh ingredients, as they need to have a long shelf life; Soylent has a one year shelf-life. To have a long shelf-life, a product needs to be processed, which can result in the loss of nutritional value and also the addition of chemicals or preservatives. In some cases, the vitamins and minerals are actually synthetic and unnatural.

Drinking Soylent has also been linked to digestion issues such as gas, diarrhea, and stomach gurgles.

Plus, preparing a healthy, varied meal can be a wonderful activity — it can help you to bond with your family and relax after a long day. By removing all meals from your life, you’ll never get to enjoy a home cooked meal or a special meal at a restaurant.

Most Registered Dietitians will recommend a meal replacement drink if it’s something that makes life more convenient, and if you are not able to meal prep. But, a good dietitian or clinician will never recommend to consume only meal replacement drinks, even for a short period of time, unless absolutely necessary (like prior to surgery).

Is It OK to Drink Soylent Every Day?

Yes, consuming Soylent on a daily basis is probably OK. However, because of the health issues that can come from forgoing all solid foods, it’s not recommended. Even the director of communications at Soylent recommends that you should only drink Soylent when you need a quick, hassle-free meal to keep you going during a busy day. It should be considered PART of a healthy diet, rather than the only element of a healthy diet. Plus, if you’re drinking Soylent to lose weight, it’s probably not the healthiest way to cut back on calories, since it ranges from 180-400 calories per serving.

Is Soylent Made From Humans?

Of course not, Soylent powders and drinks are not made from humans.

Soylent gets its name from the 1966 novel Make Room! Make Room! by Harry Harrison. In the book, the food “soylent” is made from soy and lentils. In the 1973 film Soylent Green, soylent is made from human remains. This is a movie and not to be taken seriously. Rest assured there will be no human remains in your drink!

Can You Make Your Own Soylent?

There is a growing online community of DIY-era interested in making their own Soylent alternative. Many of these people are interested in customizing their version of Soylent to suit their unique nutritional needs. Nick Poulden, an engineer, created a website where you can enter your unique details and the website will give you your own personalized Soylent recipes.

Unless you are an engineer yourself, chances are, you won’t be able to make your own Soylent. Plus, it’s unlikely you’ll find a cheaper way to make the product.

Where Can You Buy Soylent?

In the United States, Soylent is available online and in a range of stores. You’ll find the product in over 8,000 7-Elevens, and at Walmart, Target, and Kroger.

In Canada, the drink is no longer available as it failed to meet the CFIA requirements.

How Do You Make Soylent Taste Better?

If you aren’t a fan of the ‘pancakey’ taste of Soylent, there are a few ways you can improve the flavor.

Soylent was created by a man who was tired of the hassle of making meals during the days — why spend money on an overpriced sandwich to eat at your desk when you could grab a glass of Soylent and get the nutrients you need to get through your day?

Since its creation, the drink has become hugely popular with some fans opting to live off the meal replacement. While there are few studies to suggest that switching to Soylent will actually harm you, overall, it seems that the drink should only be consumed from time to time. Choosing whole foods is always a better option.

The Top 5 Fall Smoothies to Enjoy this Autumn